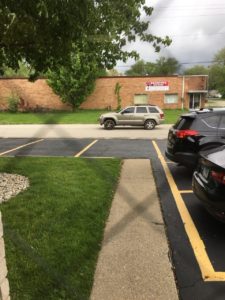 The Decatur Police Department needs your help in solving this week’s crime of the week.

The Decatur Police Department is asking for the public’s help to identify the owner or occupants of the vehicle pictured, in this released photo.

On May 18, 2020 at approximately 3:03 pm, officers were detailed to the 2200 Block of E Olive in reference to shots fired. The suspect vehicle was described as a tan Jeep Cherokee with an off-colored front driver side rim.

The second suspect was described to be a b/m, medium complexion, approximately 5’8”, thicker build, early 20s, wearing a face mask, dark colored clothing, and bright blue shoes. Witnesses heard 5 shots fired from the area of 2200 E Olive and then saw the two subjects run back to the Jeep.

The vehicle was seen leaving East bound on Logan.  While on scene, a gun-shot victim was dropped off at a local hospital. The two incidents are likely related.

If anyone can identify the owner of this vehicle or has any information regarding this incident please contact the Decatur Police Criminal Investigations Division at (217)424-2734 or submit an anonymous tip through Crime Stoppers at 423-TIPS. You do not have to give your name. Crime Stoppers will pay $500 dollars or more for information that leads to an arrest on the crime of the week. Thank you.